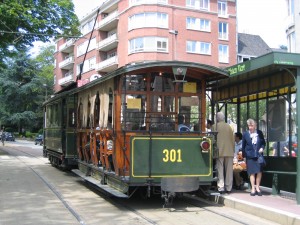 Testimonials of the careless life of the “Belle Epoque”, these open trailers were a joy for the trips of Brussels’ population six months a year until the early Thirties. Nearly 400 such trailers were built by various builders, they followed a standardised model : low underframe to facilitate the passenger flow, one single compartiment with 5 or 7 seat rows, according to the model. There were two classes in the compartiment, the first class being in the centre of the trailer, supposed to be more stable than the ends.