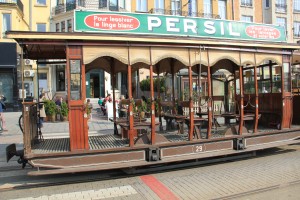 Trailer 29 is part of the last series of open cars delivered to “TB” before the Great War. They are testimonials of the careless life of the “Belle Epoque”. These open trailers were nicknamed “baladeuses” (English equivalent : “toastracks”). They transported the population of Brussels during the summer months until the 1930s. The most recent cars reappeared in the streets from time to time during World War II to carry the wounded to hospital. Others were requisitioned by the Germans as reinforcements for the Hannover and Magdeburg tram systems.