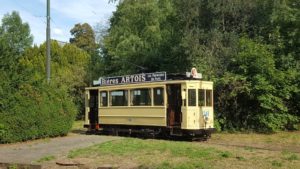 Built at the outset of WW1, this small series of motorcars was one of the first to carry since its building the “primerose” yellow livery, well known in Brussels. Also, it has kept all the typical features of the “Belle Epoque” tramways : open vestibuled platforms, longitudinal seating, two symmetrical compartments, the first class one having velvet cushions. Note the mechanical compressor built on the end of the axle, providing air for the braking system. Contrary to the majority of other cars, 1348 avoided demolition in the thirties : it remained a two-way car, being used now and then until the fifties for shuttle or reinforcement duties.